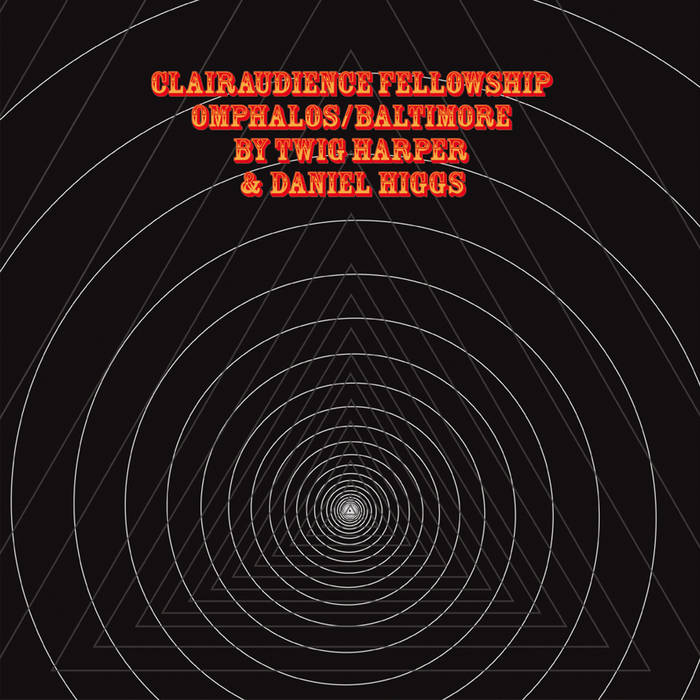 Clairaudience Fellowship is a new album from Twig Harper and Daniel Higgs, two legendary forces in the realms of experimental/noise/rock/out music.

Twig Harper is a performer and electronic sound artist who began playing guerrilla-and punk-style shows with Scheme, Mini-Systems and Nautical Almanac in the milieu of Wolf Eyes, Andrew W.K. and others involved in the Bulb / Hanson 90’s noise/total music movement in Ann Arbor, MI. Moving first to Chicago and then to Baltimore, he has toured widely in the US (five multi-month tours) and Europe (twice) with Carly Ptak and others. With Ptak, he has released many recordings and co-founded the influential Tarantula Hill venue-compound. His music and performances have been characterized generally by an incredible sense of trickery and playfulness - even foolishness - but in earnest and with careful consideration.

Daniel Higgs is a musician and artist from Baltimore, Maryland on whose behalf superlatives are destined to fail. It’s not that his artistic output – spanning three decades, numerous albums, books of poetry and collections of drawings – simply eludes classification, it defies it. Higgs is known for his work as the sole lyricist and frontman of the band Lungfish, a four-piece enshrined as one of America’s last true folk bands, and Higgs anointed as a patron saint to artistic purity. That the band has undertaken this pursuit in the guise of a humble rock outfit, in the absence of any public relations fanfare, metanarrative, or manifesto has been enough to endear them to tens of thousands. In recent years, Higgs has released a number of solo outings that can only be described as the ultimate in isolation, worlds away from the hypnotic, communal rock of his band. His latest solo recording Say God was released earlier this year on Thrill Jockey.

A Conversation With Twig Harper Regarding Clairaudience Fellowship:

How do you describe the new record to someone who has not heard it and is not familiar with Nautical Almanac or Daniel Higgs’ work?

"This record is a setting of experience by creating a bridge inside the ear striving to see linguessence/utterance immediately prior to verbal distinction placed firmly inside a double helix weave ultra verbal mirror."

How would you describe it to someone who is familiar with your other work?

"This is a really special record, something that’s been silently brewing in the backs of our minds for years, unknown and hidden even to us until we decided to let it breathe."

Please elaborate on recording techniques, instruments, and other technical information that might provide the listener more insight.

"Daniel brought intonation of previous transcribed word forms a resonation of the immediate experience of the responsive reaction of the recording as it was unfolding and taking place. The sounds formed by non-linear processing techniques, so that we would be able to receive the channeled manifestation. Tape loops that moved according to what sounds and air pressure vibrating the room, smoke filled mixing boards set to multiple effect chained feedback circuits, open minds, synthesizers with independent sound wills interacting with ours, and hidden layers of multiple spoken tracks thrown in a syncronistic overlayment that was sculpted and raised to the heavens."

How did this duet come about?

"This recording was a direct result of Baltimore Maryland, Daniel Higgs and Twig Harper, starting from less and less random meetings to a level of enjoyment of each other, of shared past occurrences and lead to a willing of a creative fellowship. All are welcome to join in the Clairaudience Fellowship."

Origins of the band and name?

"Clairaudience: to hear beyond physical vibration. Fellowship: in a communal or collaborative way."

Daniel Higgs is a musician and artist from Baltimore, Maryland on whose behalf superlatives are destined to fail. It’s not that his artistic output – spanning three decades, numerous albums, books of poetry and drawings – simply eludes classification, it defies it. His art is of the cosmos, we on Earth merely lucky that it happens to be confined to our atmosphere, in our lifetime. ... more

Bandcamp Daily  your guide to the world of Bandcamp